There can be no argument that there have been teething problems during the relatively recent introduction of disc brakes to cyclocross racing. Here we tap into the expertise of early adopter Alan 'crossjunkie' Dorrington with some basic but essential advice for those with discs.

DISC brakes in cyclocross have been the major love 'em or loathe 'em subject of technical debate of the last few seasons. Enthusiastically adopted by some, fiercely rejected by others. And only partially embraced by the professional end of the sport.

At Fluent in Cross (Alan's new website launching on August 26th) we've tried them all. From single-moving piston BB7 type mechanical systems, through hydraulic compromise systems like V-Twin and Parabox, into cable operated hydraulic caliper systems like Hy/Rd to full on hydraulic systems from the likes of SRAM and Shimano.

They all work to varying degrees of success and performance standards

And they all work to varying degrees of success and performance standards. We won't go into the pros and cons of each system here, let alone the full debate about cantilever versus disc – we'll leave that for another time. Instead, here we'll focus on one of the biggest issue affecting disc usage amongst first time users – that of pad wear. 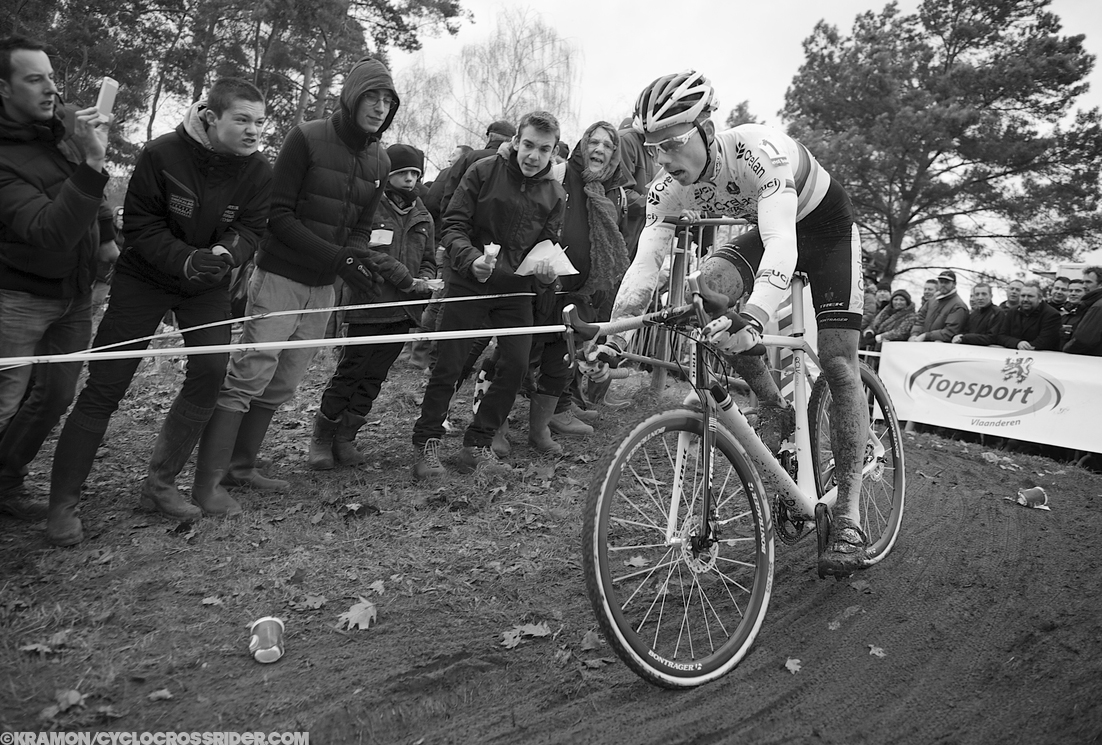 Top: Lars van der Haar is a pro racer who has embraced disc brakes and won last seasons World Cup on them. Above: Much fanfare was made when Sven Nys' disc-shod Trek Boones were unveiled on New Year's Day 2014, but he rarely laps on the them when racing preferring cantilevers. ©kramon

This writer's email inbox, twitter feed and anecdotal feed (gabbing on) has been full of the same story over the past year or so. An enthusiastic disc virgin whose hopes of a miracle cure for their cyclocross braking woes have been dashed, by the apparent failure of their lovely disc brakes within a single long ride, or even one hour cross race. The complaint is always the same – that of pad wear so great as to render the brakes useless within X timeframe.

And in almost all cases, the cause is the same. It's something mountain bikers have initially suffered from too, then learned to work with and now have mastered completely. Those cyclocross disc newcomers from outside of a mountain bike background have usually neglected or at least underestimated, the importance of pad compound and pad bedding in. That is not to say that there haven't been instances of complete pad wear within a few laps or few miles in particularly challenging conditions – think US Nationals in 2012 – but mostly the solution is simple.

Many new users of disc brakes are unaware that there are different compounds out there ranging from soft organic to fully metallic sintered, with several gradations in between. And it is also not always known by the first time user that original factory products are almost always issued with the soft organic pads. Partly on grounds of cost and partly that most producers aren't located in the high rainfall, high silica and grit geologies that we have here, at least in much of Great Britain (and in particular north west England).

Put simply, an organic pad in a normal British winter is unlikely to last long, especially in bad conditions, and needs to be swapped out pretty much straight away for a semi-metallic or better still fully metallic sintered pad. Equally pads that are not bedded in will simply shred through in double quick time, even to some degree sintered compounds as well. Bedding in with heat allows a crust to form on the pad, that then protects from abrasion, as well as spreading pad material onto the disc rotor to allow stronger 'meshing' of pad and rotor and consequently, more powerful braking. 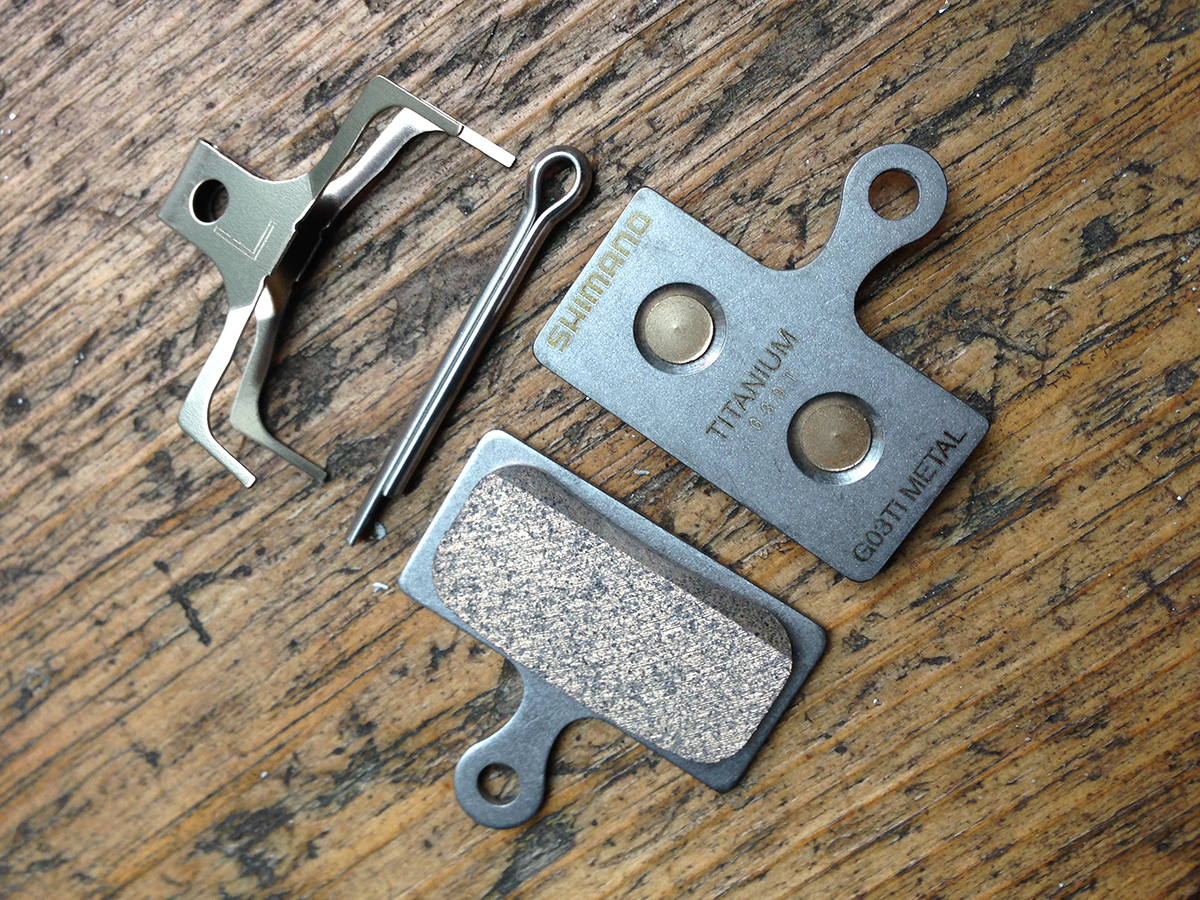 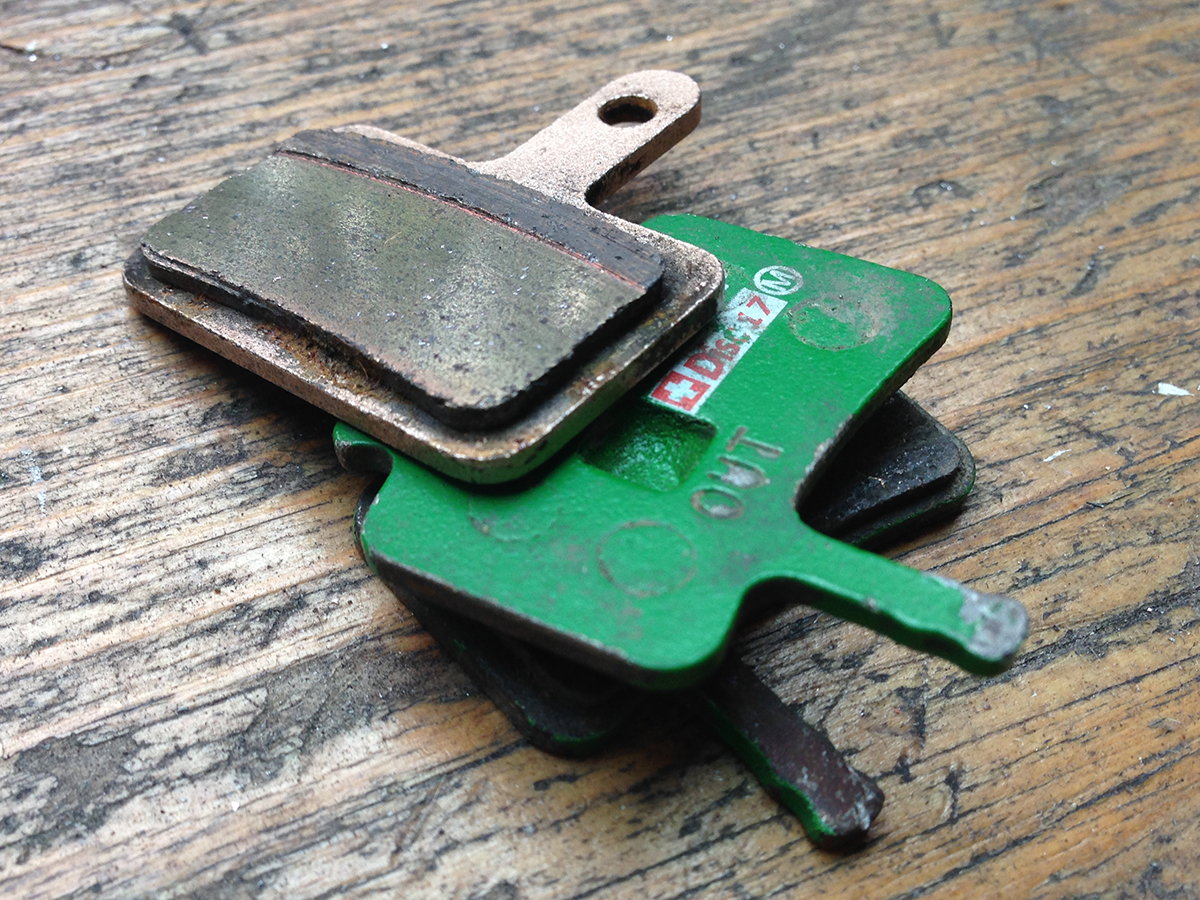 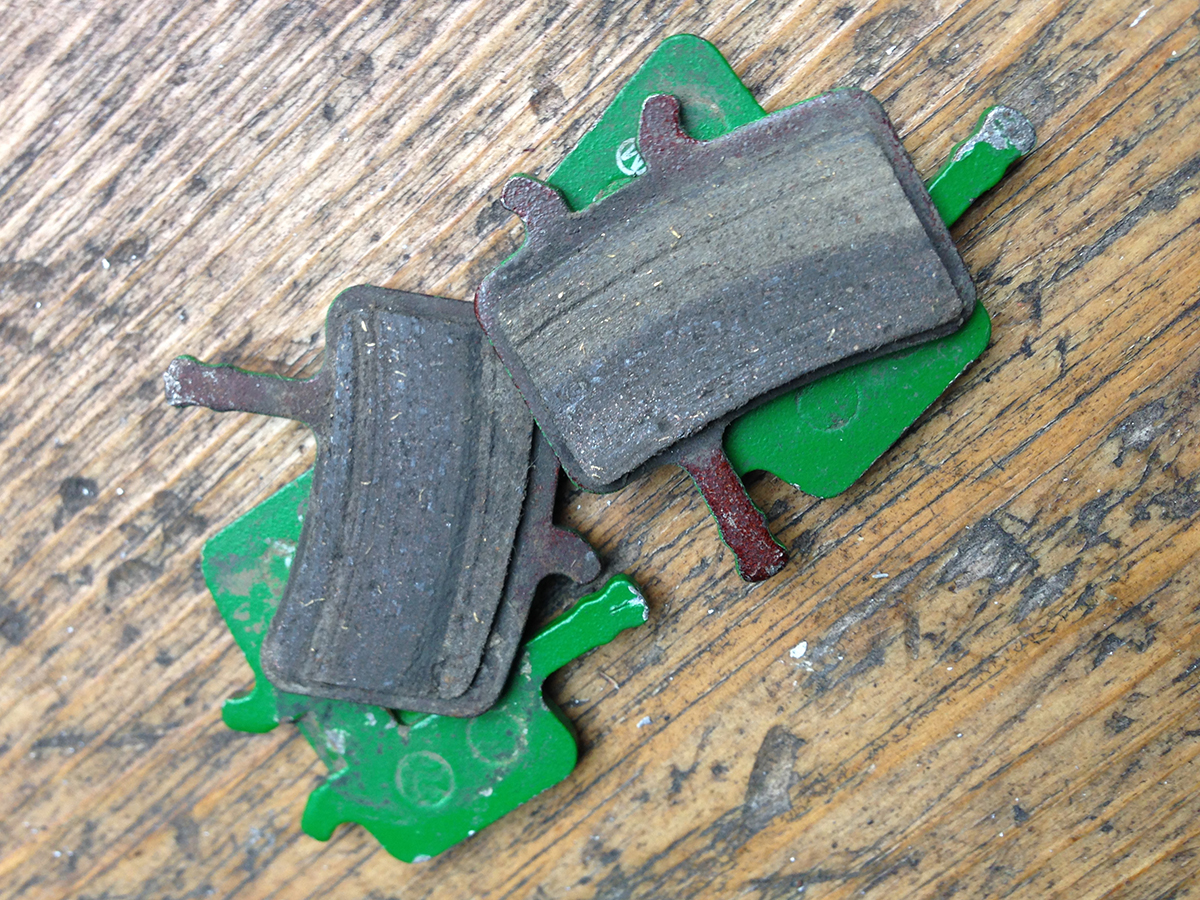 Top: A brand new pair of titanium backed Shimano XTR sintered pads. Shimano also offer the XTR pad as an organic with aluminium backing. Middle: A sintered Deore-type pad showing glazing and uneven wear caused by incorrect caliper mounting. Above: Organic pads from SwissStop that are worn mostly due to muddy grit rotating with the rotor (with cutouts). They have life left for maybe one more muddy race (with thanks to Mike Kangelos of PUSH).

So, unless you live in a dry and dusty area, make sure you always run semi- or full-metallic pads and bed them in properly. Bedding in can be done by repeated runs (in the dry) down a hill utilising hard braking efforts to get heat into the pads, and allow the glazing process to work. Dragging the brakes also gets some heat in but it is those hard braking efforts that will really set your pads up for longevity and performance. Enjoy.

Alan Dorrington is aka 'Crossjunkie' and is a driving force behind Fluent in Cross.
This article is adapted from a post on FiC and we hope to share future articles from the new site.