There was a controversial two-up sprint at the end of the Koppenbergcross – controversial because a third, lapped rider played a part in it (before being disqualified) and denied fans a true battle for the line, reports Konrad Manning. additional reporting: Paul Burgoine, photos: Kristof Ramon. 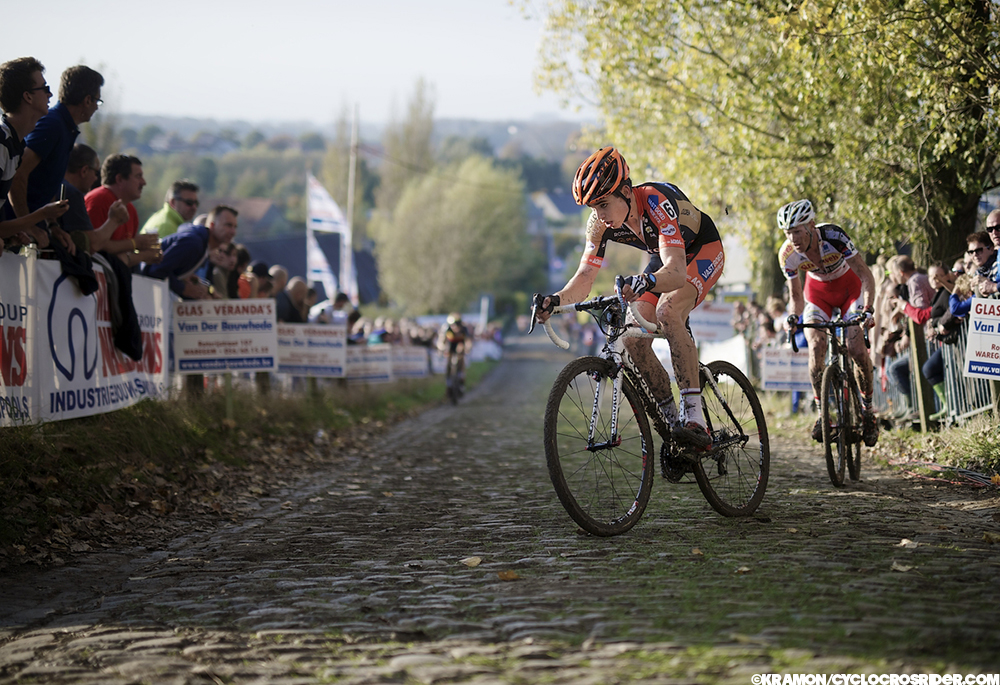 BELGIAN champion Sven Nys was rightfully unhappy with the sprint finish at the end of the Koppenbergcross near Oudenaarde today. Whilst Nys, looking for his tenth win in the race, may not have had the speed to come around Wout Van Aert to take the win it was the antics of Van Aert’s lapped team mate Jan Denuwelaere that spoilt what was building up to be a nail biting sprint for all viewers and spectators.

Nys had attacked towards the top of the climb on the final lap and only World Under-23 champion Van Aert was able to stay in contact and he bravely dived in front of Nys at the top of the long descent. Van Aert descended with all the vigour of youth, but Nys, 18 years his senior, remained on his tail and tracked him right to the final corner to take it to a two-up sprint.

Denuwelaere ignored officials telling him to leave the race

What neither rider knew however was that there were going to be three riders involved in the sprint. Jan Denuwelaere who had ignored race officials telling him to leave the race (the rules say that riders more than 80% behind the leaders can be pulled from the race) stayed 'in the race' around the final corner and exiting it, restricted where the two riders sprinting for the win could go and so narrowed the road space for the sprint. Nys attempted to get on terms with Van Aert, but soon sat up and remonstrated back to Denuwelaere as the young 20-year-old leader started his victory celebrations.

“It was a really good race, I felt really strong and that tactics I used were perfect,” Nys told reporters after the race, “I accelerated at the right moment and the only guy who could follow was Wout, but that’s not a problem. When we were both on the limit we can sprint for it. The only problem was there was a guy on the last corner in the middle of the road where I tried to come near Wout, and I my speed was totally gone, and I lost one or two metres, and the race was finished.”

He was racing in the middle of the road in the last corner – how can you do something like that?

Asked how the situation could have been avoided Nys replied, “The commissaire, the UCI, needed to put him out of the race with the 80% rule, but there is an opportunity for the rider to ride off to the side and let the guys sprinting for victory through. He was racing in the middle of the road in the last corner – how can you do something like that?” said Nys calmly. 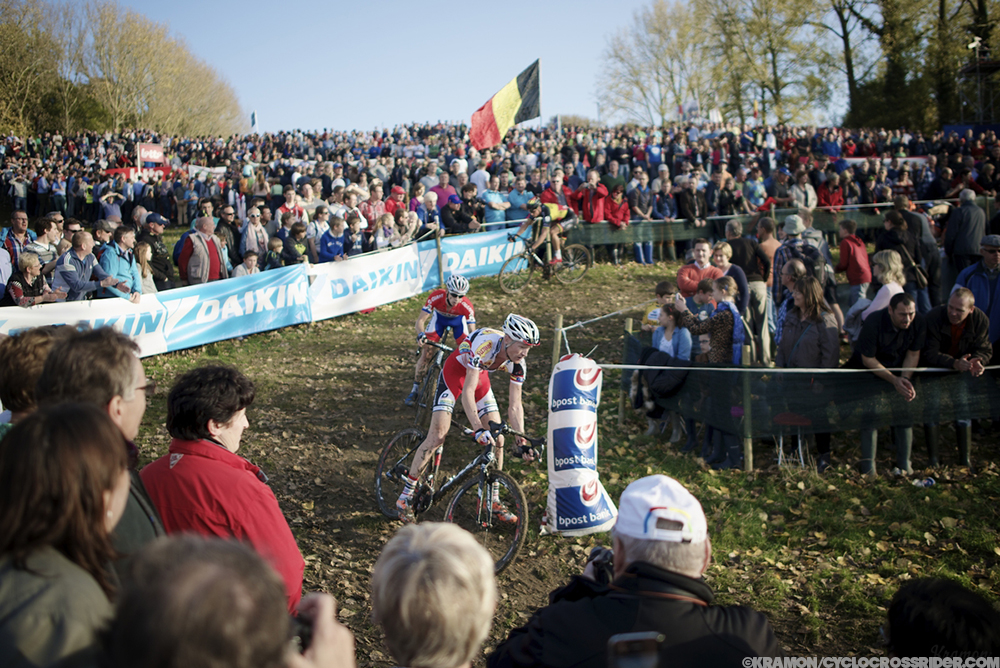 Denuwelaere was disqualified and served with two fines amounting to 200 Swiss Francs, the maximum that the jury could impose for “not following the instructions of race officials” (continuing to race) and also for “assisting a team mate.” The tall Belgian maintained afterwards that it was not his intention to interfere with the race, but it was noticeable that as soon as he crossed the line behind Nys, he about-turned and headed the opposite direction down the finish straight.

As for Van Aert, he didn’t put a foot wrong all race and was always in the front group except for when Kevin Pauwels attacked alone with three (of the eight) laps to go. Impressively, it was Van Aert who led the pursuit of Pauwels in the chase group of now only five riders: Van Aert; Van der Haar; Vantornout; Nys; and last year’s winner Tom Meeusen. Behind them, but at 25 seconds were Thijs Van Amerongen, Bart Aernouts and Rob Peeters. 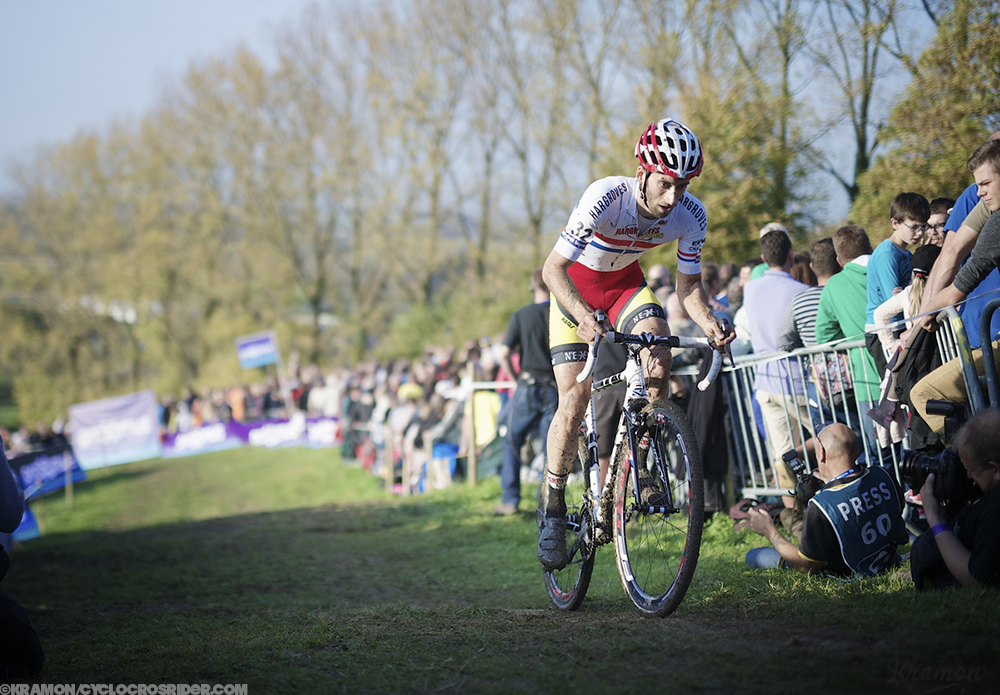 British champion Ian Field (above) had been riding strongly in ninth or tenth place, but unfortunately lost contact with the lead group as Nys took the time bonus on the second ascent and eight riders went clear. Field was unlucky not to rejoin the lead group when it briefly swelled to ten riders and eventually finished fifteenth.

With two laps to go Pauwels led alone by 15 seconds, but Nys and Van Aert were perhaps looking the strongest. At the top of the penultimate ascent of the Koppenberg the podium seemed to be decided as Vantornout pitted and Meeusen and Van der Haar both fell away.

At the bell, Pauwels slowed and allowed Van Aert and Nys join him - Vantornout was left ten seconds adrift in fourth place. Vantornout did rejoin the leading trio but Nys launched two big attacks on the climb and only Van Aert was able to respond and they tackled the final descent to the road finish alone.

Van Aert’s team manager Niels Albert was full of praise for his charge’s victory, but was brief when asked about the sprint. "I understand that there is some debate, but Jan does little wrong - the fault lies with the judges who had to take him out of the race,” Albert commented. 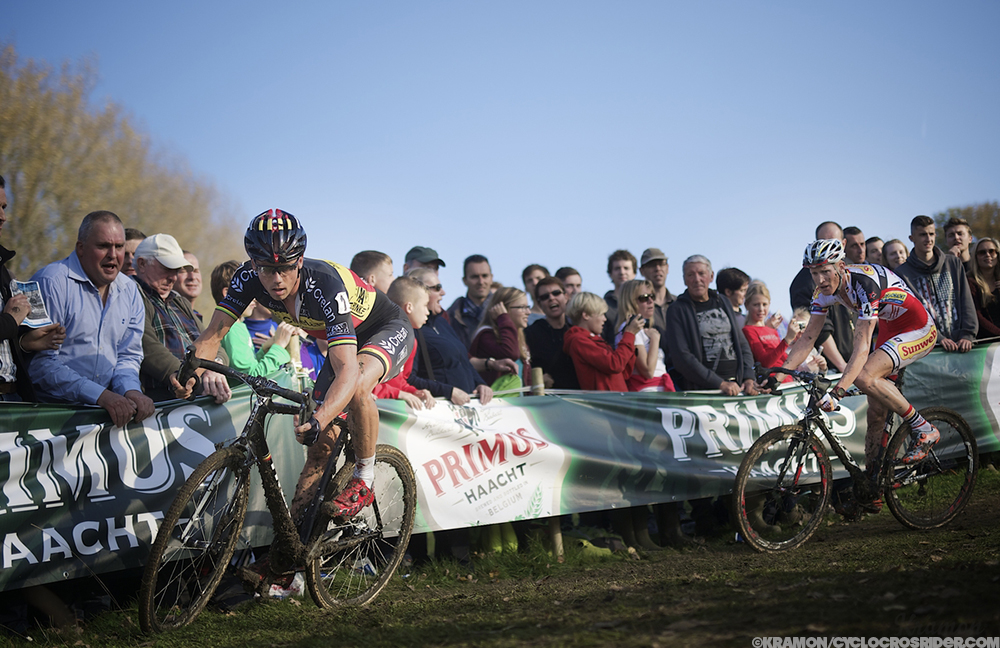 Despite the controversial finish, Nys extended his lead in the overall bpost Bank Trofee series and now leads Klaas Vantornout by 1 minute 54 seconds .

Nys concluded, “I feel now like I raced for nothing. There was no sprint for me and that’s frustrating. Tomorrow is another day, but I face another young guy who hasn’t raced today in Mathieu Van der Poel who is fresh tomorrow so it’s going to be hard.”