WVA V MVDP // STRADE BIANCHE: Round One to Wout rematch on Wednesday

It goes without saying that 2020 is a year like no other for the entire world not just for the comparatively small sport of professional cycle racing and it is with some trepidation that events have resumed. In a compressed road calendar the two biggest names in cyclocross should face each other at least five times. Strade Bianche was round one of Wout versus Mathieu.

UCI WorldTour racing resumed yesterday (Saturday) with the 14th Strade Bianche, the race across eleven sections (63km) of white roads or tratti sterrati, and it was three-time World cyclocross champion Wout van Aert who came out on top in a thrilling finale.

It was the Belgian's third attempt at Strade Bianche having come very close in 2018 and 2019 finishing third on both occasions (in 2018 he famously came unstuck with cramp at the top of the final Santa Catarina climb). In between Van Aert's most recent appearances in Strade Bianche, of course, he suffered a horror crash in the Tour de France time trial, the injuries from which were almost career ending (he spent two weeks in hospital almost exactly one year ago).

"If you get two third places in a row, of course you have confidence here," Van Aert told the media after the race, "Today was one, long day of suffering and I think that no one felt really great. The heat was exhausting but I really focussed on the hydration and keeping cool and in the end I had something left." 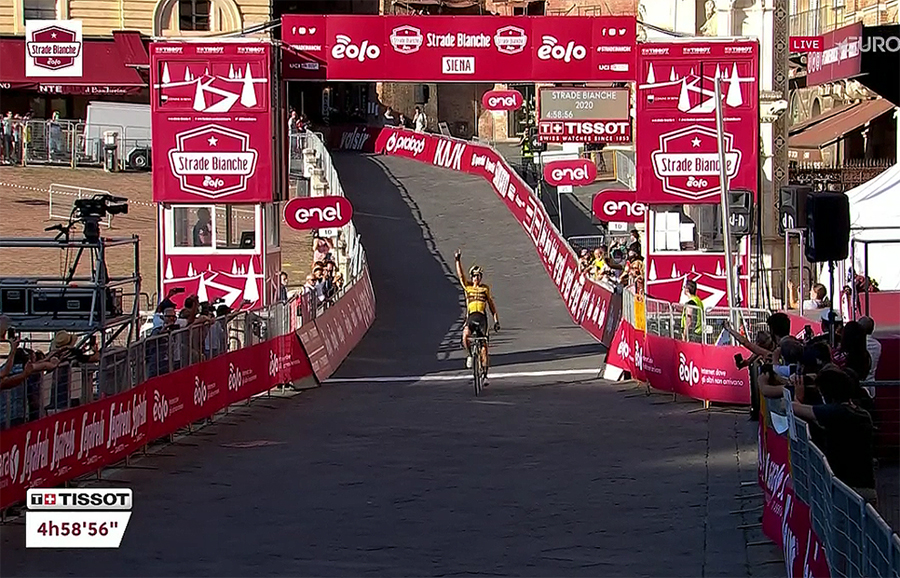 It's tempting to suggest that Strade Bianche is a race so specific in its parcours that you have to have ridden one to go on and win one - or in Van Aert's case ridden two, but the races's roll of honour is actually littered with debut winners including former cyclocross champions Zdenek Stybar in 2015 and Julian Alaphilippe in 2019.

What is clear is that Strade Bianche most definitely suits a rider with off-road riding experience and great bike handling skills with almost a third of the race on the white roads.

World 'cross champion Mathieu van der Poel was making his debut in the race. The Dutchman did everything right though and was with the leading group until a puncture put him on the backfoot with about 75km to go as the favourites entered the second-longest sector Monte Sante Marie.

Problems for some favourites

News of Van der Poel's puncture and subsequent chase (Alaphilippe also punctured and Nibali crashed in a short space of time) seemed to light the blue touch paper for the group of favourites as first Simon Clarke and then Jacob Fuglsang launched long range attacks.

Although Van der Poel chased hard, and seemed to breeze past a fading Julian Alaphilippe, the pace at the front went up and he simply could not close the gap. Van der Poel eventually finished 15th some ten minutes after Van Aert but just behind previous race winner Michal Kwiatkowski.

"I lost a good result there, I think I can say that. It was the section before the Sante Marie gravel section, I think the most important one. I had to dig really deep to get back there, together with Alaphilippe and a few other guys. And they all dropped at the Sante Marie section. It was so hot and we had to go over the limit to get back to the front group and then it was over," Cycling Weekly quoted Van der Poel after the race.

Van Aert always looked to be one of the strongest as the lead group continued to reduce in size as the kilometres ticked by and he launched his solo attack with 13 kilometres remaining.

"Attack is always the best defence," Van Aert said, "I gave it a try in a downhill and gained a little advantage for the steep part and from there it was a man to man fight and, er yeah, it worked. I really fell in love with this race two years ago and it was my goal to win this race once."

With temperatures reaching the mid-thirties Celsius, there was no final drama for the Belgian as he successfully crested the final climb and crossed the line - one arm aloft - in the Piazza del Campo.

Unusually Van Aert raced a bike with rim brakes which seemed a popular choice with a number of riders. Only 42 riders finished the men's race with a further eight coming over the line outside the time limit.

We won't have to wait very long until the WVA V MVDP rematch as both are expected to tackle the 101st Milan-Turin on Wednesday before the long 291km Milan-Sanremo monument on Saturday where Van Aert finished sixth in 2019.

Racing is most definitely back.

🎙️ @WoutvanAert: "It's never easy to win and it was harder than usual in today's circumstances. It makes the win even better. This is proof that I'm at the highest level now. To have won #StradeBianche at the age of only 25, with a cyclocross background is a huge achievement". pic.twitter.com/yESkYHESsA

Mathieu and Wout are both on the start list for Milan-Turin which takes place on Wednesday (5th August) along with a host of other big names getting more racing miles in their legs before Saturday's Milan-Sanremo. Wednesday's 198km semi-classic was first held in 1876 and is largely a flat affair won in 2019 by Michael Woods. The race is being broadcast on Eurosport Player (scheduled to start around 16:00 BST).

Some of the sprinters who will also be looking for glory are Peter Sagan, Nacer Bouhanni, Sam Bennett, Arnaud Demare, Caleb Ewen and Fernando Gaviria. Philippe Gilbert and Vincento Nibali are also on the start list.

"The 101st edition is played out on a virtually flat route, except while crossing the Monferrato, where the peloton will tackle a succession of short yet punchy bits. Starting in Mesero and crossing through Magenta, the route continues along the Po Valley, on wide and straight roads. After crossing the Po near Valenza, the route follows the constant undulations of the Monferrato, and then levels out past Asti. The last 70 km run almost flat all the way to the finish in Stupinigi."