Mathieu van der Poel was in dominant form in the opening round of the UCI World Cup in Iowa City. With World champion Wout Van Aert suffering a puncture, it was pretty much a one-man show from the flying Dutchman. Photos by Jeff Corcoran.

"WHEN you want win the World Cup overall, you have to come here to ride," said Mathieu van der Poel. The Boebank-Corendon rider missed last year's CrossVegas and Jingle Cross World Cup roundss as he was recovering from knee injury, but still finished second in the overall series.

After last year's deflating World Championship silver medal ride, the Dutch champion pledged to make the trip to the States, saying, "I'm going to try my best to have an injury-free summer and to be at the [U.S.] World Cups."

Van der Poel not only had a summer free of BMX bike injuries, but had both mountain bike and road success as he prepared for this cyclocross season.

Yet the Dutch phenom arrived in Iowa City as a relative American cyclocross newbie. In his way was Belgian rival and World Champion Wout van Aert, who won his last four starts in the States, including the only three American World Cups that have ever been held.

Would fans be treated to a beautiful duel at Johnson County Fairgrounds? Eighteen other Belgians, three Dutch and six Europeans along with twenty-three North Americans were hoping to prevent the race from becoming a two-way battle. 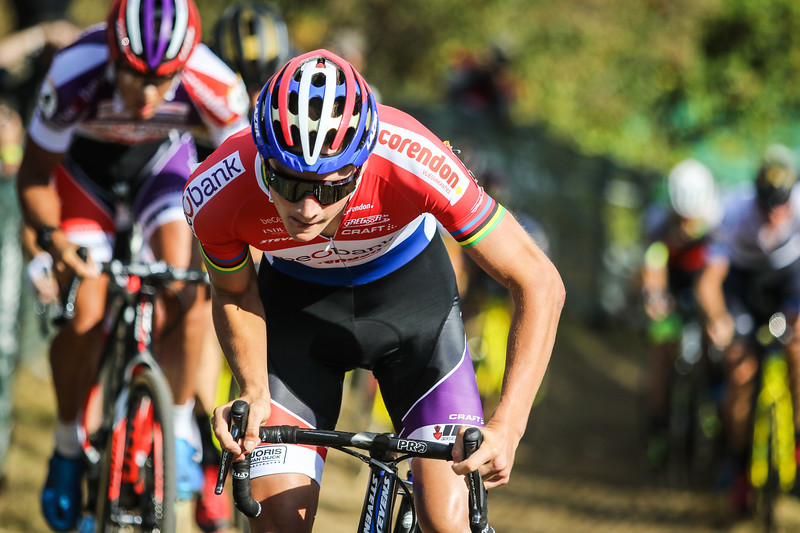 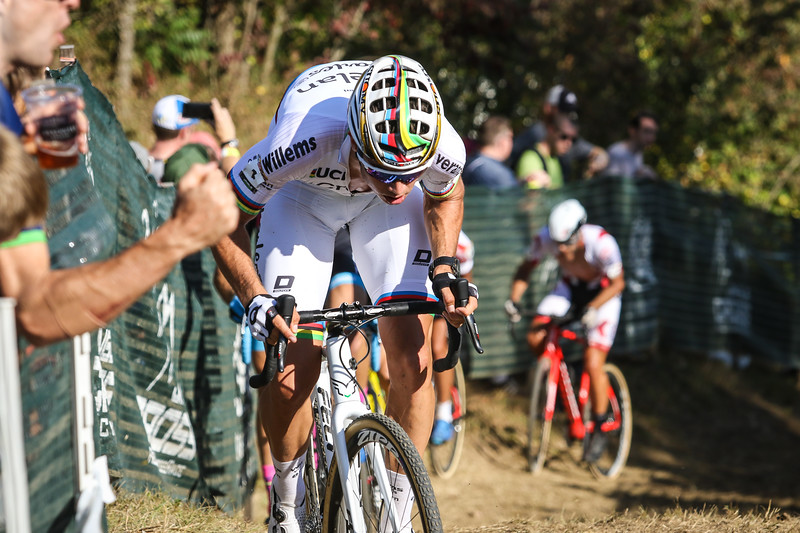 Pedal to the Metal

"It's always nice to ride your own lines and do your own pace," Van der Poel said. His own lines and pace early in the first lap was too much for the others. On the first time up Mt. Krumpit, the Dutch champ flew up the initial stairs, sprinted up the climb and by the top of the hill, had four seconds in his pocket.

Behind, Van der Poel's teammate Meeusen was in second, and was eager to show his younger captain the ultimate loyalty by taking his foot off the gas. While Meeusen didn't finish, his work paid off. Quinten Hermans (Telenet Fidea Lions), Laurens Sweeck (ERA-Circus) and the rainbow-striped Van Aert (Crelan Charles) hopped around Meeusen and hopped over the barrier in their chase of Van der Poel, but none could match the speed and aerials of the leader. 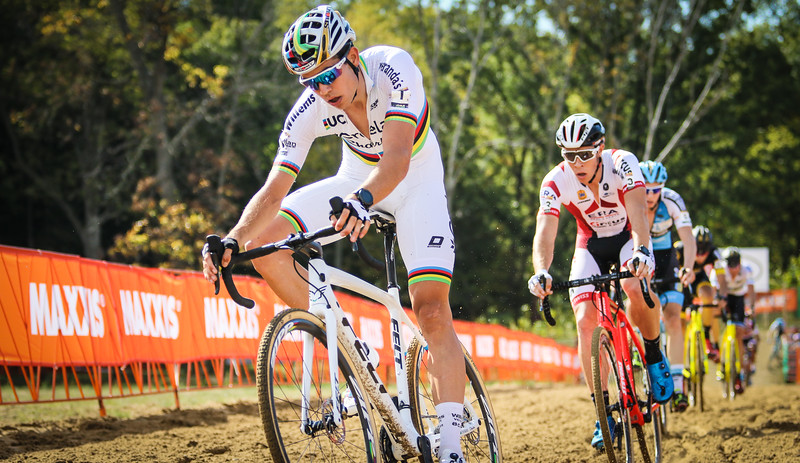 By the end of lap one, Van der Poel had ten seconds, and time to choose his own lines and pace, which included launching off the main flyover and putting on a show for the fans on lap two. 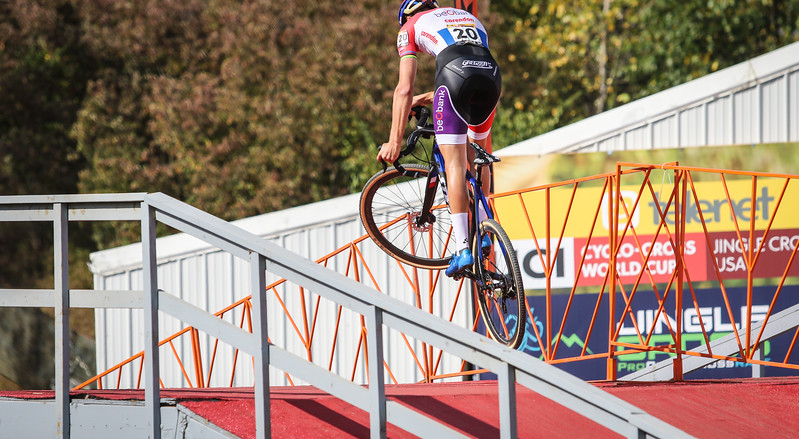 By lap three, the gap was 25 seconds, and Hermans and Sweeck took control of the chase. Behind them Van Aert had to pit, and then shortly after, flatted and had to pit again. His path to continuing his American win streak now had a Mt. Krumpit-sized obstacle in the way.

Friday night's top-two, Laurens Sweeck and Quinten Hermans, found themselves in a repeat of their Friday night battle, only with first place looking to be out of reach and hoping for Van der Poel to have a mechanical.

Their wishes were answered, albeit briefly, as Van der Poel dropped his chain descending the front side of Mt. Krumpit. He lost seconds getting it back on, but after a bit of panic, his gap was still 22 seconds.

He dialed back his descending speed, stabilized the gap and settled in for a long solo ten-lap ride.

Behind, Sweeck and Hermans found themselves in an impromptu pact. "I think we were kind of teammates today," Hermans said. "We were just working, riding for the podium and sprinting for second. I had Lars [van der Haar] slowing down Kevin Pauwels, so that was perfect for me."

"We were still riding for second and third," Sweeck revealed about his in-race collaboration with his compatriot Hermans. "It was necessary because Pauwels was coming, but we were good together and had a good race also." 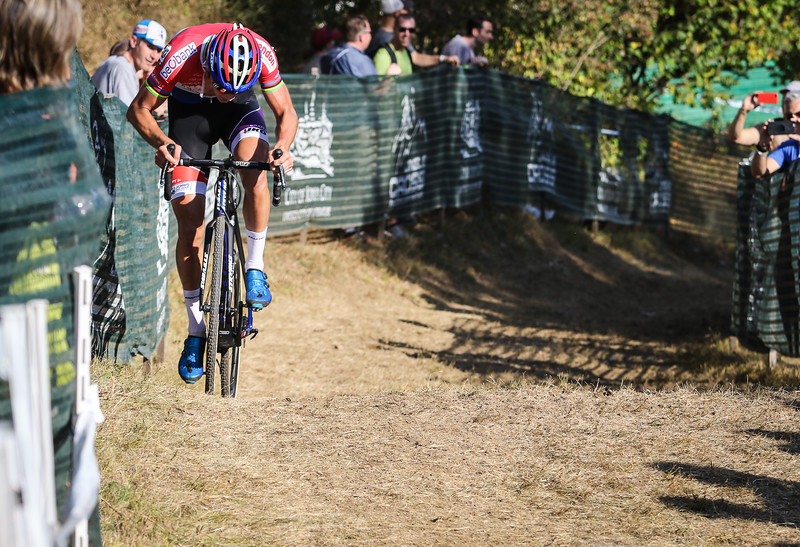 With Sweeck and Hermans focused on defending their second podium of the festival, Van der Poel was free. Free to freestyle in the air off the flyovers, free to follow the packed line in the sand pit and free to soar over the barriers and up Mt. Krumpit.

The gap ticked back up. With half the race to go, his gap was 37 seconds. One lap later it was 43 seconds, but with two to go, he had empty water bottle, but a jersey pocket filled with seconds as his gap approached one minute.

High Temps Get to the Americans in Iowa

Americans Stephen Hyde (Cannondale p/b CyclocrossWorld) and Kerry Werner (Kona) featured in the chase group early on, but as the laps turned over, Friday's racing may have caught up with them. Werner would finish 19th, an impressive result for his second season racing World Cups. National Champion Hyde hope to repeat his impressive top-ten finish from 2016, or his seventh from Friday night, but not everything went to plan. 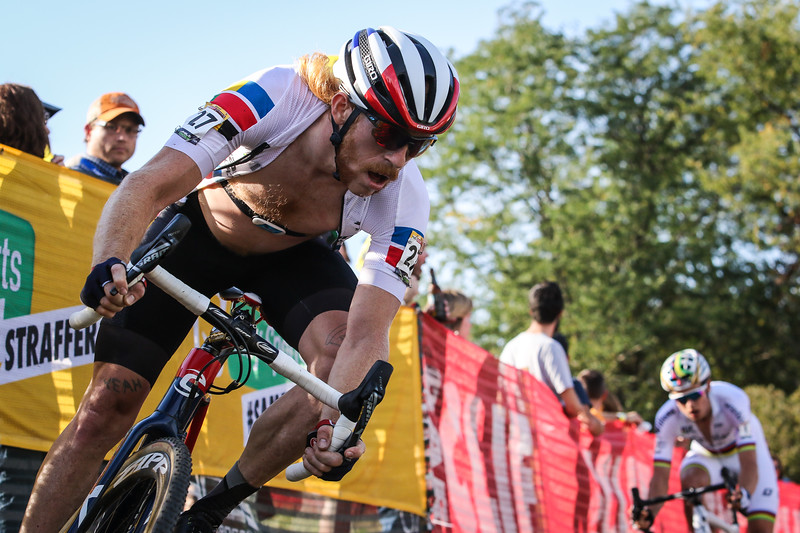 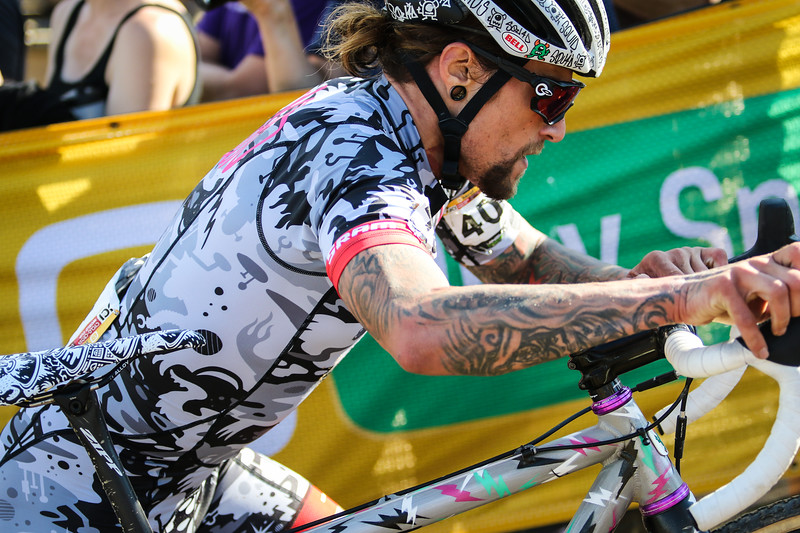 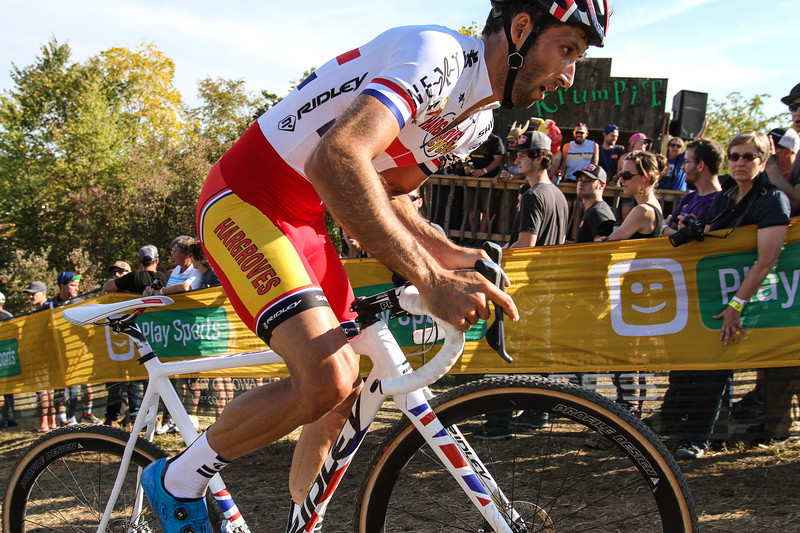 A Sprint for Silver

While Van der Poel was cruising in to celebrate taking the first World Cup of the 2017/2018 season, Sweeck and Hermans took their friendly duel deep into the last lap.

Neither Belgian could shake the other, and as the race wound down, it was clear the second podium spot would go to the best sprinter. Sweeck got the jump on the sprint and Hermans conceded, content to take home the third podium spot. "It was not much of a battle," Hermans admitted. "He had a sprint at the end and I didn't. I was just so empty and I was happy with my third place." 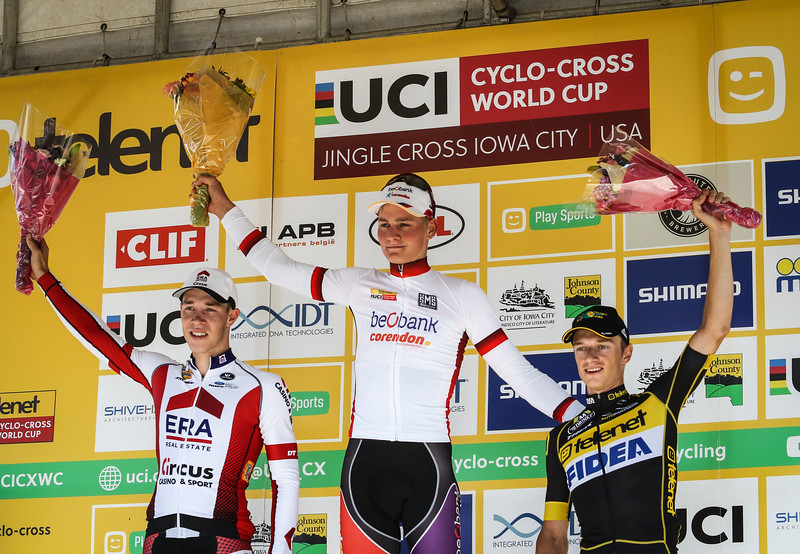 The U.S. leg of the Telenet UCI World Cup continues next weekend in Waterloo, Wisconsin. The Trek Factory grounds will host a UCI C2 race on Friday, and then the World Cup Waterloo on Sunday.