A keen-looking Jan Denuwelaere (VGS) started his first 'cross races at the weekend (September 6-7th) since his eight-month-long premature retirement earlier this year. The West Flandrian (pictured above), who signed for the Vastgoedservice-Golden Palace team in 2014, raced well both on Saturday and Sunday in (the B-circuit races) Steenhuffel and Hofstade-Zemst, but bad luck kept him from the podium or perhaps even a victory.
Denuwelaere was leading in Steenhuffel until getting tangled in the course tapes.
"I suddenly got stuck in the tapes and reacted too hastily, breaking my rear gear mech off, so I had to change bikes. From down in 25th position, I fought back to seventh place. I was not totally happy with that, but the general feeling is really good. We will never know if I could have won!"
In Hofstade, the course was less suited to the powerful Belgian.
"A lot of cornering has never been my thing, yet I was on my way to a certain third place until the tub came off the rim twice in the last lap. I fell back to fifth place," said Denuwelaere.

So all in all encouraging for ex-moto cross racer Denuwelaere, but perhaps not the podium finishes that he would have liked to have achieved under the watchful eye of his new team leader, the now retired, Niels Albert. 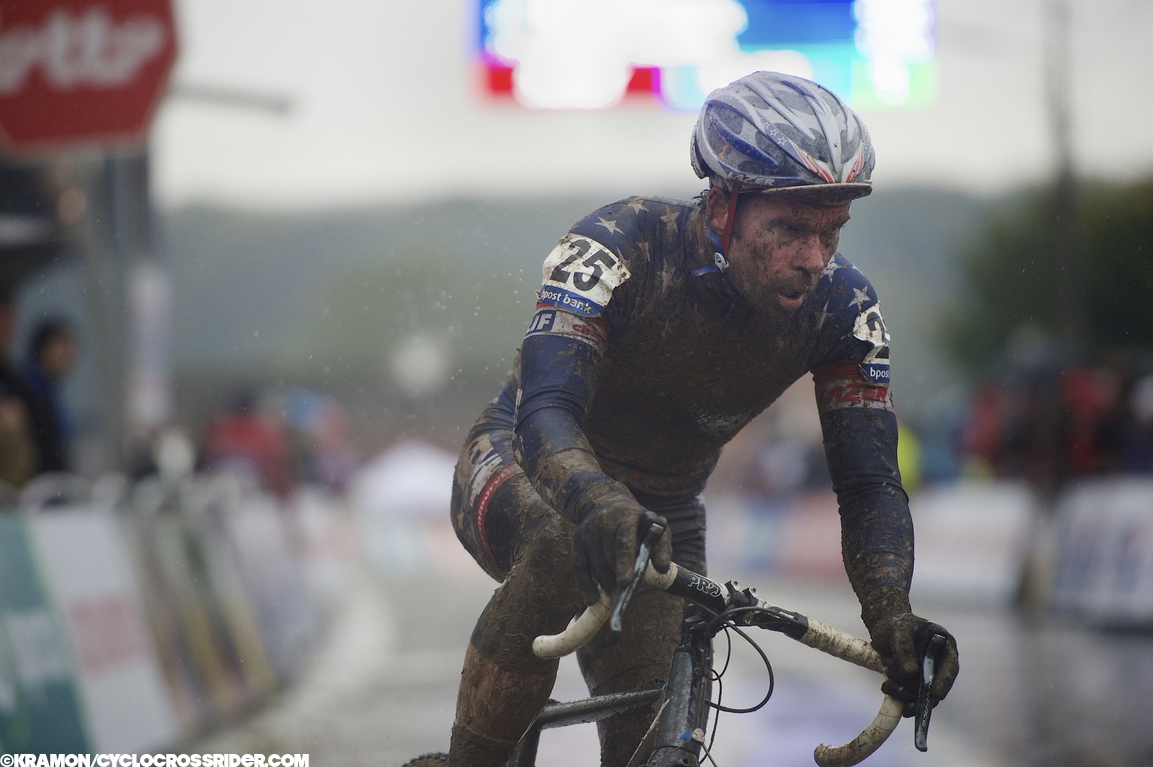 Four-time American champion Jonathan Page (above) will unveil a brand new skinsuit in Vegas on Wednesday evening (Thursday morning) bearing the name of his new title sponsor – XcellLED lights. The company sells non-toxic, eco-friendly lamps.
After CrossVegas, Page will also stay on in America for races in Boulder, Baltimore, Gloucester and Providence before returning to his Belgian base of Oudenaarde.
The popular 37-year-old will continue to race on Fuji bikes and also have the support of sponsors Spy, Shimano, Clif Bar, Lazer helmets, Sommerville Sports and Challenge tubulars. XcellLED owner Bob Downs has been Page's main sponsor before with his other venture Planet Bike.

The UCI World Mountainbike Championships were held in Hafjell, Norway at the weekend with several 'crossers selected to represent their countries.
Congratulations to Canadian 'cross champion Catharine Pendrel (Luna Chix Pro) who won her second women's elite cross country title by 21 seconds, to add to her recent Commonwealth title, and goes into Wednesday's CrossVegas race certainly on form, if not perhaps a little tired.

Dutchman Michiel van der Heijden (Giant), the World Under-23 'cross bronze medalist in Koksijde (2012), won the Under-23 men's title. Pauline Ferrand-Prevot (Liv/Giant) could only finish eighth in the women's Under-23 race after a crash, a twisted chain and a new chain that broke spoiled her chances of a medal.
There is a full re-run of the women's title race here on Red Bull TV.

Belgian road star Greg Van Avermaet recently gave away 1,000 free spectator tickets to the Flandriencross in Hamme-Zogge on November 30th after winning a stage of August's Eneco Tour. The Belgian BMC rider has now made another pledge to the organisers of the Trofee race in Hamme – to give away free frites via the local frituur if (*) he wins the World road race championships in Spain later this month. The race has been renamed the Flandriencross, following a venue change, and locally born Van Avermaet has become a figurehead for the relocated race.

US SEASON KICKS OFF

The new American UCI cyclocross season began at the weekend with the C2-ranked Nittany Lion Crosses in Breiningsville, Pennsylvania. American-based Brit Gabby Durrin (Neon Velo) won Saturday's tactical women's race in a sprint - wearing race number 13, a number that she chose for the US season (see our BTB TV film profile of the Durrins here). Jacob Lasley was the elite men's winner in a close finish as (Mister) Jeremy Durrin took fifth place. On the Sunday Mr & Mrs Durrin both finished on the third step of the podium.

Read our Vegas preview here which includes details of the live webcast.